Hiking route "Along the Coast" 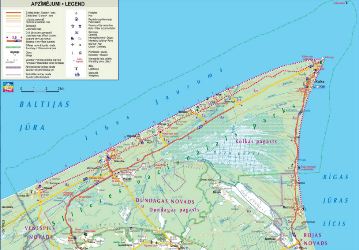 "Along the Coast" brochure available in  English, German  Latvian and Russian

The territory of the Slītere National Park has a sandy beach that is around 40 kilometres long and is appropriate for short hikes or ones that take several days. There are no insurmountable obstacles for people on foot between Melnsils and Sīkrags. When planning your route, remember that the average distance which one can cover on foot in one hour is between four (moderate pace) and six (rapid pace) kilometres.

Plan a circular route which leads back to the point of origin. To make the route more interesting, you can walk along the Kolka-Mazirbe-Sīkrags route in the Slītere National Park. It passes through small Liv villages and lovely pine forests with lots of natural elements including impressive dunes. Remember that this is a longer route than the one which runs along the seashore. For instance, the distance between Košrags and Vaide is 7.5 km along the seashore, while the bike route is around 9 km long. Add the 2 km from the sea to the aforementioned villages, and the overall route will be around 18 kilometres in length. The village centres are as far as one kilometre from the sea.

Hikers can also have other options:

Here are a few hiking routes: