(If the link from the map doesn't work, download a pdf document!)

For more hiking routes, see our section for hikers!

This route is appropriate for active tourists who are interested in coastal landscapes and the culture of the Liv people. The old forest road passes through five Liv villages: Mazirbe, Košrags, Pitrags, Saunags and Vaide. Some trace of the old days and fishermen lifestyle is still found here. Returning by the Ventspils–Kolka road (P124), which is paved and marked in the route map. It is possible to start touring the villages at any point.

Season: April-October.
Length: ~28 km, doable in one day.
Time: ~5 h if you stop and look at the villages.
Type of bicycle: mountain bike.
Difficulty: medium.
Road cover: approximately half of the route is paved, while roads in the forest are gravelled in some places and paved in others.
Beginning and end: Mazirbe, Liv People’s Hall.
Route: Mazirbe-Košrags-Pitrags-Saunags-Vaide, then the P 124 road back to Mazirbe.
Markings: between Mazirbe and Vaide the route is marked with poles and green signs with cycling symbol.
Alternatives: you can ride the route in the opposite direction or continue along the Kolka-Mazirbe-Sīkrags bike route that has been established by the Slītere National Park (passing through the forest back to Kolka, this will add 11 km to your route). Because this is a circular route, it can be started or finished anywhere.
Distance from Rīga: 170 km.
Note: the forest roads between the Liv villages can be in poor shape – they’re sandy and can have big puddles when it rains, and tree roots on the surface. 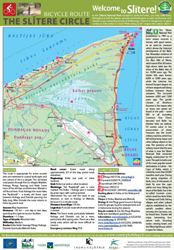 This route is also for active tourists. Coastal landscapes and the Liv's cultural heritage can be observed on the way. The old forest road passes through five Liv villages: Mazirbe, Košrags, Pitrags, Saunags and Vaide. Some trace of the old days and fishermen lifestyle is still found here. From Košrags the route takes the ”Apakšceļš” – a lonely old forest road between Košrags and Dūmele passsing the Bažu bog. After Dūmele the route returns to Kolka by paved road.

Season: May-September.
Distance: ~50 km – one day or two days, spending the night at some local guesthouse.
Duration: 1-2 days.
Type of bicycle: mountain bike.
Difficulty: medium.
Route: Kolka-Vaide-Saunags-Pitrags-Košrags-Dūmele-Ezermuiža-Melnsils-Kolka.
Road cover: forest roads along approximately 2/3 of the way, paved roads elsewhere.
Beginning and end: Kolka (car park or other location).
Markings: the “Apakšceļš” part is color marked, the Kolka–Košrags part is marked by green signs with cycling symbol.
Alternatives: you can ride the route in any direction, or start at Košrags or Melnsils, because it is a circular route.
Distance from Rīga: 150 km.
Note: the forest roads, particularly between Košrags and Dūmele, can be a mess, particularly after spring rains, and there are a few sandy areas which will be more difficult to traverse.

A route for car drivers is also suitable for cycling.